Designing an education in the 21st century 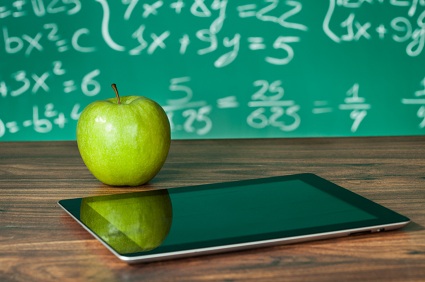 Educators across the country are turning to educational technology to enhance the classroom experience and make learning more engaging and compelling for students. Connected devices such as tablets, smartphones and whiteboards, as well as cloud-based applications, have become standard in many school districts and colleges. As a result, educators are re-thinking their approach to educational standards as technology continues its march upon the nation's classrooms.

The role of technology in designing a modern education is a gray area, though, because educators aren't planning their approach on a level playing field.

In many ways, bringing devices such as iPads and smartboards into classrooms is still a brave new world, says Tosin Williams, an eight-year teacher with Inglewood Unified School District in Southern California. Tablet computers are an effective learning tool, Tosin says, but the way they can be used in classrooms still is being defined -- and there's a fine line between education and entertainment.

"Our schools are pushing to get as close to one device per student as possible. The major challenge is effectively using these tools not only to engage students but to successfully deliver a lesson," she says. "A challenge I've faced is having students be too distracted by the entertainment aspect of the tablets."

Educational technology versus the bottom line

Schools from one coast to the other face shrinking budgets and need cost-effective, long-term technology solutions that won't become outdated in a few short years. What works in one district or university may be cost-prohibitive in another.

Gene Ornstead, director of product marketing for ViewSonic Corporation of Walnut, Calif., a manufacturer of tablets, interactive projectors and other visual technology often deployed in educational settings, says cost plays a large role in schools' decisions to implement different types of educational technology. Suburban schools in middle- to upper-class neighborhoods may be able to outfit entire classrooms with tablets or desktop computers, but cash-strapped inner-city districts often have to turn elsewhere. ViewSonic offers cloud-based educational technology that uses a fraction of the energy of a desktop computer and monitor.

"Schools are looking for technology that provides a unique experience, enables interactivity and collaboration. Schools also need to stretch budgets and get the best value for too few dollars," Ornstead says. "Administrators are consistently forced to do more with less and are looking for the most interactive and engaging technology at the lowest cost."

Challenges of implementing edu-tech in the modern classroom

Bandwidth can be a major concern -- not all schools have a robust IT infrastructure that supports newer educational technology trends, says Dr. Michael Connell, chief executive officer of Native Brain Inc. of Boston and a former instructor at the Harvard Graduate School of Education.

Another challenge: iPads, which have become the device of choice for many school districts due to their ease of use and widespread availability of educational apps, have to be charged, secured and moved about from classroom to classroom. Educational applications also have to be managed across the entire fleet of a school's devices. Perhaps the biggest drawback, though, is that iPads by their nature were meant to be personal devices, not shared effectively among different classrooms full of students.

"There is no notion of accounts or profiles on the devices, and there are technical challenges in setting up student profiles within the apps," Connell says. "And saving student work is difficult and in many cases not possible."

The future of education technology

Technology already is a core part of modern curricula, from education-based apps to real-time tracking of student progress, and the boundary between home and classroom is expected to become more blurred in future generations. Coming soon is the day parents can log in from work to check their child's progress in real time, much the same as teachers can see where a student might be struggling with a difficult problem or concept.

But bringing devices that have become standard fare in the American landscape into the classroom better positions students for success outside of the classroom, educators say. The key shift, says Chris Rafter, senior vice president and southwest regional manager of Logicalis U.S., is that educational technology places more emphasis on the thinking skills associated with solving a problem than on specific knowledge and memorization.

"Students using connected devices in the classroom and at home are constantly connected, and this places a greater emphasis on developing critical-thinking skills and teaches them how to quickly sift through large quantities of data and form conclusions to solve problems," Rafter says. "This is an important skill to be teaching students today for the world they are growing up in and will inhabit."

"If you have the entire history of every math task a student has ever completed and you know precisely what they do and do not understand, you can just report that out instead of administering a separate test," says Native Brain's Connell.