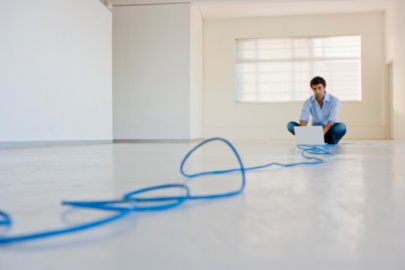 It took her an hour to download a single Power Point file for her online nursing class. That, for Sarah Stracco, was a fast download.

When Stracco, a busy nurse with a young child, looked into RN to BSN degrees, college online made perfect sense. She wanted a BSN in order to expand her career options, but was limited in one important resource: time. So she researched online schools, applied to one that was a good fit, and voila -- she had entered the world of distance learning.

But a crucial detail stood in the way: her Internet connection. Stracco is one of approximately 19 million Americans who still lacks fixed broadband access, a figure reported in the August 2012 Eighth Broadband Progress Report from the Federal Communications Commission (FCC). In Stracco's home state of Vermont, 9.4 percent of the population still depends upon tantrum-inducing dial-up connections, prohibitively expensive satellite connections and slightly-less-expensive-but-erratic cellular connections.

Ultimately, Stracco made it work -- sort of. She shelled out the money for a cellular modem, which gave her enough connectivity to complete her coursework. What it didn't do was enable her to take advantage of live Q&A sessions with her instructors and other bandwidth-intensive features of her online schooling.

Bandwidth as a bottleneck for educators

In many rural areas of the country, broadband access remains an impediment to edu-tech, both for online learners such as Stracco and for educators in traditional classrooms, particularly at the k-12 level.

The State Educational Technology Directors Association reports that by the 2014-15 academic year, schools in the U.S. will need broadband speeds of 100Mbps for every 1,000 users, including students and staff members. An FCC survey of schools qualifying for federal assistance showed that 80 percent had broadband speeds that fell short of their educational needs.

Charlie Niehaus, Technology Director of the Altamont Community Unit School District in Illinois, describes low bandwidth as a "bottleneck" for teachers in his community. His district has the vision of incorporating more technology into the classroom, but teachers have had trouble taking full advantage of technologies such as e-Congress, Moodle, streaming video and audio, and cloud computing because they are situated in a rural area and the connection speeds they need simply aren't available.

Recognizing the importance of bandwidth to meet the country's technology needs, Congress made it a priority in 2009 to guarantee that every American has "access to broadband capability" and instructed the FCC to develop a National Broadband Plan. The FCC released the plan in 2010, which was greeted with both enthusiasm ("the most aggressive plan to date") and skepticism ("too ambitious and not detailed enough"), according to the New York Times.

Regardless of one's take on the plan, there is no question that it intends to be far-reaching. The plan lays out six long-term goals that include providing at least 100 million homes with affordable access to download speeds of at least 100 megabits per second (the current average is three to four megabits per second) and giving every community affordable access to speeds of at least 1 gigabit per second. The plan also calls for upgrading the FCC's E-Rate program, which provides financial assistance to schools for the purchase of Internet service.

In fact, the National Broadband Plan calls for up to $25 billion in spending to meet its objectives, and billions of federal dollars have already been allocated in the past two years for broadband overhaul.

Rolling out the funding

In the small, disconnected state of Vermont, more money for broadband could sound like a pipe dream -- except that funding for broadband expansion has begun to pour in. In 2010, the Vermont Telephone Company (VTel) received $116 million in federal funding to expand its broadband service, which will go toward installing fiber optic cables and creating a "Wireless Open World" network to provide wireless 4G/LTE broadband. Stracco's small town of Westminster has been designated one of VTel's target communities for broadband expansion, and is slated to be connected in 2013.

In the Midwest, the Illinois Century Network, thanks in part to federal stimulus money, is in the process of installing a new fiber optic network. By August 2013, the Altamont Community Unit School District will have 50 times the bandwidth it could access a couple of years ago.

We have the iPads, now bring us the bandwidth

As educational technology evolves, students and teachers are chomping at the bit for a chance to use today's tech solutions. In fact, Apple CEO Tim Cook told investors that the adoption of the iPad by educational institutions was "unlike anything I've seen in technology." During the second quarter of 2012, Apple sold one million iPads to schools, which was twice the sale of its Mac computers.

The iPads are in place. Does the technology infrastructure support the demand for edu-tech opportunities? Not entirely. But given the pace of recent improvements and the federal cheerleading and funding for building the broadband foundation, there's great hope for the future.

More Reading:
How does your state's broadband compare? View the FCC's 2012 broadband rankings by state (Appendix C).
What's the situation in your community? View the National Broadband Map for current speeds and providers in your area.
Where's the money going in your state? Read the results of 2011 federal technology grants to states.
Is your school's Internet access fast enough for digital learning? Take the School Speed Test.